How to Get What You Want in a Divorce 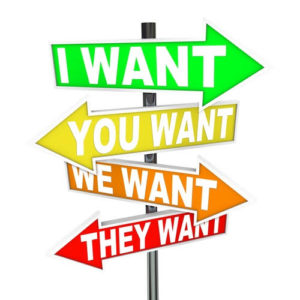 From the outset, I discuss with my clients what their bottom line is and what they are willing to negotiate on. Typically, in the beginning, the client wants everything but the kitchen sink. Over time, however, the way that bottom line ends up morphing is astounding, especially as the urgency to get relief from the situation envelops the client. Of course, the goal in litigation is to get the other side’s bottom line to morph towards you as much as possible. In mediation, it’s to get the clients to meet somewhere in the happy middle.

One of my clients wanted his wife to have a certain amount of life insurance, with him being the trustee. She agreed, with the stipulation that she be the trustee of his life insurance. He didn’t want that and realized it wasn’t important enough to him to delay the process. So, he chose to “pick his battles” and took this out of the negotiation altogether (even though that was originally his ideal end situation).

Another client wanted her husband to pay towards multiple extracurricular activities for their very young child, especially as he could more than well afford it. His position was that he would pay towards only one extracurricular activity that he thought most appropriate to enhance the child’s development at any given time. He was very obstinate on this point and would not budge. They had a joint custody arrangement, where ALL decisions relating to the child were to be made jointly, and both parents were very involved. She ultimately decided that if she allocated and budgeted her money carefully enough and cut down personal spendings in other areas, she could come up with the money to pay for the child to be enrolled in multiple extracurricular activities at a time, as was really important to her. We proposed that she would be responsible for all extracurricular activities above the one he agreed to pay for, but that she would also NOT need his consent. He resisted at first because it meant relinquishing some of his control and decision making. Ultimately, he begrudgingly acquiesced, and the parties signed off on it.

Those can be categorized as more “small ticket items.” Sometimes, divorcing parties start to feel such an overpowering desire for immediate relief and resolution, they start bending on “big ticket items.” For example, they may start offering to accept significantly less in basic child support than they are entitled to pursuant to the statute; or to pay a lot more (if they are the non-custodial parent to pay basic child support). It is critical that the parties are anchored, thinking it through clearly, and not “selling their shirts,” so to speak, for the immediate gratification of a speedy divorce.

As clients go home and crunch their own numbers, they seem to start analyzing their lives more. They think about their lifestyle and what they want in the short and long-term future—different things end up being important than what was initially thought.

In terms of negotiation tools, what people think is going to be important to the other party often isn’t. This is most poignant during mediations when each side fills out a separate intake form where they convey their desired results and bottom lines. I’ve had a wife say in mediation, “I know him; I know what’s important to him.” As the mediator, I knew that, in fact, it was something else that was important to him—something the wife would not have thought of—and vice versa.

Sometimes, during litigation, the other party’s responses to a settlement proposal focus on something that is such minutia to my client, we would laugh about it. That’s an important piece when bartering—each party can receive “his/her minutiae” and everyone can be happy.

Often when clients think through their situation, they calm down on their own. What once was a problem becomes a non-issue. So rather than throw fuel into the fire, let things simmer on their own. Be willing to morph your bottom line, and focus on what’s really important to you in your divorce negotiations.