YOU ARE NOT THE PERSON I MARRIED 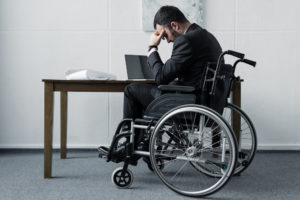 Basic Second Law of Thermodynamics is that things gradually fall apart — into a state of disorder and disrepair. As powerful as gravity, the overwhelming force of the world’s natural tendencies is hard to beat.

It is no surprise that, as humans, we too peak in our state of optimal growth and then our systems, more often than not, decline. Most people expect this to happen, but way down the line, in some fuzzy distant future. However, life does not always follow the script and premature illness is challenging to grapple with.

Classic wedding vows include “in sickness and in health;” there is this overriding expectation that spouses can stand by each other through the most vulnerable times, but not everyone can or wants to stay in a marriage that goes from friend, companion, and partnership to caretaker when their spouse’s health turns south during what may be the “prime” years of their lives.

“Superman,” aka, Christopher Reeves, was a famous case of caretaking by a spouse. Michael J. Fox has been very open about his Parkinson’s and remains married throughout his ordeals. The much beloved novel from the 1970’s by Erich Segal, “Love Story,” portrayed a strong love in the midst of a wife dying of cancer; but, not all marriages unfold this way in the face of illness or disability; not all spouses feel so committed, love to this degree, or can handle their spouse’s ailments.

I have seen a full spectrum of reactions to a spouse’s illness in the face of separation and divorce from exceedingly collaborative and amicable to vicious and hostile. The former instances include extending as much time as needed to the ill spouse to acclimate to the idea of divorce; agreeing to pay well above the statutory maintenance guideline amounts to comfortably support an ill spouse; living under a separation agreement for an extended period of time rather than finalizing a divorce so the ill spouse can remain on the other’s health insurance plan, which separation allows for but divorce bars; proceeding with a divorce but agreeing to pay the permitted 3 years of COBRA for dependents to allow the ill spouse to have continued health insurance for at least that duration of time; and agreeing to remain married for a minimum of ten years so the ill spouse can collect off the other’s social security, which is permitted once couples are married for ten years.

On the litigious end, I have seen a husband and father who left his cancerous wife, subpoena his only child, an adult son, who had moved in to his mother’s house to help her while she had cancer; the husband’s agenda was to impute his son’s income to his ill wife, so that he wouldn’t have to pay her maintenance.

More of these “cheery” stories include a husband who stayed with his ill wife, with whom he had two children, for years but had a long term extra-marital affair that fostered additional children, who he funneled more money to than to his wife and children of the marriage. He said his wife’s progressive illness killed any semblance of what he wanted and needed out of a marriage, but that he felt too guilty to leave her while his children with her were growing up. He commenced a divorce action when his children of the marriage were grown, but they were onto him, and it became a case of children against father. The children were actually attorneys, and they pieced together that their father had spent hundreds of thousands of dollars on his “other” family. They were intent on getting the best deal they could for their mother to compensate her for all the marital money their father had spent on the other woman and children in his life. For better or worse, this man was not a sympathetic character before the presiding judge, who practically forced a very harsh settlement deal down his throat in open court.

Often when someone can’t handle their spouse’s illness, they stay out of guilt, fear of a protective relative, or because of perceived obligation, but eventually check out. They feel like a prisoner to their relationship and are often resentful.

Both the healthy and ill spouses in these instances are sympathetic in different ways and require strong advocacy; they suffered enough, and until we walk in another’s shoes, it can be difficult to pass judgment on their actions and decisions.

Please contact The Law & Mediation Offices of Cheryl Stein with any questions.